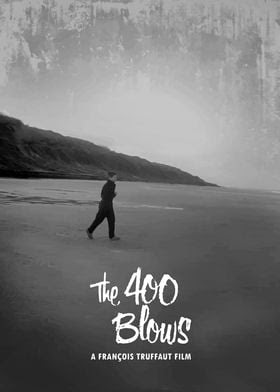 Francois Truffaut said over and over that Cinema literally saved his life, It took a delinquent student and gave him something to love. With the encouragement of his mentor Andre Bazin Truffaut became a film critic and then made The 400 Blows by his 27th birthday. If the New Wave marks the dividing point between classic and modern cinema (and many think it does), then Truffaut is likely the most beloved of modern directors - the one whose films resonated with the deepest, richest love of moviemaking.  The palpable feeling of intense intimacy can be explained by the fact that the film was Inspired by Truffaut's own early life, it shows a resourceful boy growing up in Paris and apparently dashing headlong into a life of crime. Beautifully and shot in black and white, in a  matter-of-fact neutrality that borders on the documentary The 400 Blows demolishes the barriers between autobiography and fiction, actor and character, performance and personality. It is one of the most intensely touching stories ever made about a young adolescent. with an astonishingly natural performance from its young star Jean-Pierre Leaud. It is very poignant but never marred by being sentimental.
As landmark films go, this is one unassuming masterpiece: intimate, accessible, funny, honest, fresh and heartbreaking.This semi-autobiographical tale allows Truffaut to excel with material only he knows best and create a film that will remain a classic.

'Truffaut's masterful debut is one of the all-time-great coming-of-age movies and concludes with the most expressive freeze-frame in the history of the medium.’ Time Out

Watch the trailer here; https://www.youtube.com/watch?v=ICGZfU-9Yl0
***Don't forget you can join our film club with membership still only £35 for 10 screenings. PLUS use of our extensive DVD library, priority booking with any other on location or WFC screening and exclusive invite to our lavish Christmas party. You KNOW it makes sense!***
Posted by Worthing Film Club at 06:25 No comments: 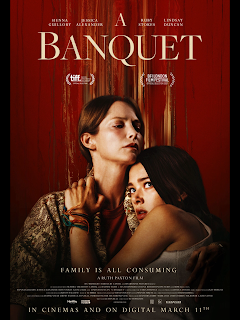 This dark and engaging British horror film is the debut feature of Scottish director Ruth Paxton. It deals with widowed mother Holly (Sienna Guillory) being radically tested when her teenage daughter Betsey (Jessica Alexander) experiences a profound enlightenment and insists that her body is no longer her own, but in service to a higher power. Bound to her newfound faith, Betsey refuses to eat but loses no weight. In an agonizing dilemma, torn between love and fear, Holly is forced to confront the boundaries of her own beliefs. The film is an unnerving and unsettling exploration of what lies below the surface of the supposedly happy family, while raising interesting questions about faith and destiny. A real slow-burner it will be one not to miss.

‘Paxton is in expert control of her film, achieving her effects with economy and force. It really is unnerving.’  Peter Bradshaw - The Guardian

Posted by Worthing Film Club at 18:25 No comments: 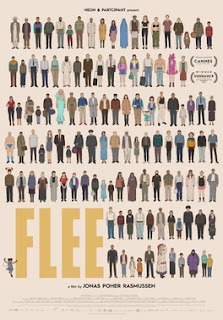 An animated documentary telling the true story about a man’s need to confront his past in order to truly have a future. Amin arrived as an unaccompanied minor in Denmark from Afghanistan. Today, at 36, he is a successful academic and is getting married to his long-time boyfriend. A secret he has been hiding for over 20 years threatens to ruin the life he has built for himself. For the first time, he is sharing his story with his close friend.
Here;s the trail to whet your apetitte:

★★★★★ Flee is a remarkably humanising and complex film The Guardian★★★★★ An unfortunately timely film, Flee uses animation primarily to sharpen the dangerous edges of its refugee story Observer★★★★★ Flee morphs from a tale of dispossession to a testament to the power of narrative – to overtake a life, and to liberate it. The Washington Post

Posted by Worthing Film Club at 12:23 No comments: 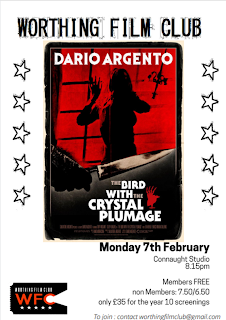 BIRD WITH A CRYSTAL PLUMMAGE

A rare treat to see this stunning genre-defining cult classic in 4K!!!!

An American expatriate in Rome witnesses an attempted murder that is connected to an ongoing killing spree in the city, and despite himself and his girlfriend being targeted by the killer, he conducts his own investigation.
Dario Argento’s debut, credited as popularising the ‘Giallo’ genre, is an unsettling horror that still thrills 50 years after it’s original release. The building blocks that Argento would capitalise on for his more well known Suspiria or Tenebrae are all on display here. With a top notch soundtrack from ENNIO MORRICONE, don't miss this opportunity to see this on the big screen.
Posted by Worthing Film Club at 01:21 No comments: