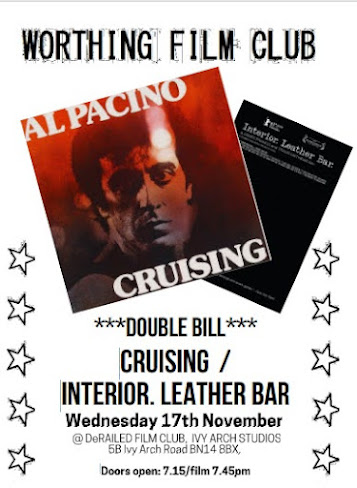 We’re not entirely sure why, he’s absolutely terrific in this; Friedkin’s leather infused masterpiece which sees police officer Pacino hunting a serial killer who’s targeting the gay leather scene in 1970’s New York. The production was dogged by problems; leading to a notorious forty minutes of deleted and subsequently lost footage.

This incredibly rare opportunity to see this controversial film, but then there's more! This double bill also features Interior. Leather Bar. (2013). James Franco and Travis Matthews’ bold and brilliant mockumentary in which they portray film makers working on a production to reimagine and recreate those infamous lost forty minutes. Provocative, explicit, and audacious, Interior. Leather Bar. is a real gem that, for any fan of Cruising, is a must-see.
To see these two films back to back on the big screen truly is an experience you’ll never forget, and it’s certainly not one you’ll find anywhere else!!

We can’t wait to see you on Wednesday 17th November.

Posted by Worthing Film Club at 14:01