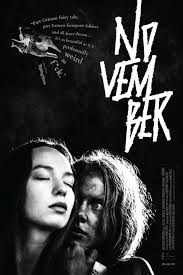 November (2017) is a gorgeously shot, deeply strange, hugely atmospheric black-and-white trip through a tale of magic and malice in folkloric rural Estonia. Based on a novel Rehepapp by Andrus Kivirahk Estonian writer-director Rainer Sarnet, uses ancient folk tales from the region to deconstruct a love triangle that turns the familiar into something shockingly unexpected. It’s both gravely serious and a demonically funny, a blend meant to catch audiences off balance and serve up a something truly unique.

Skilfully blending the ordinary with the outlandish, magic with the mundane the director draws us into the world of Estonian folklore, where werewolves lurk, spirits roam, the plague threatens, and a young girl named Liina is ready to die in the name of love. Nothing in this village is taboo as the residents fight the odds to survive the cold winter with the aid of kratts, farmers’ helpers created out of old tools, hay, and animal bones and brought to life by the devil himself.

Inspired by the photographs Johannes Paasuke took of Estonian peasants in the 19th century Sarnet and her cinematographer Mart Taniel have forged a stunningly poetic film, both monochromatic and mesmerizing, and without sentimental crutches that usually accompany ghost stories. Everything feels freshly observed, offbeat in ways that make us see the past through eyes that are woke. Christian traditions go head to head with pagan rituals, self-gratification battles selflessness and love unrequited may be better than no love at all.

Much of the film’s appeal lies in the utterly transfixing and hugely innovative black and white cinematography (some of it shot on infrared), that deservedly won the cinematography prize in Tribeca in 2017. A special nod too for Polish composer and musician Jacaszek, who knows how to use an electric guitar to fry your nerves, and helps to add another layer of intensity to this heady brew.

November is a folk tale too odd to begin with “once upon a time,” and far too peculiar to end with “happily ever after”, so be sure to allow yourself to come under its spell. Don’t miss this entrancing gem.

***Few films offer the experience of being swept into a folktale. Like the tides of a strange dream, November pulls you into its beguiling world: an impoverished town in 19th-century Estonia. Emily Buder - No Film School***

Posted by Worthing Film Club at 14:54 No comments: