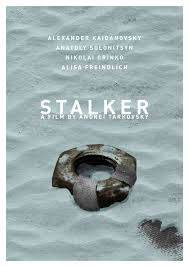 September's film from Russian director And Tarkovsky is Stalker (1979).

WFC are very proud to be screening Russian auteur and visionary Andrei Tarkovsky’s 1979 masterpiece Stalker, on this the film’s 40th anniversary. Patrick Nabarro of pnabarro wordpress states that the film is ‘One of the most mesmeric visual and sonic scapes ever committed to celluloid, Andrei Tarkovsky’s stunning Stalker is a true existential parable – with its huge maguffin of ‘The Zone’ nothing more than a genius dramaturgical blank canvas around which Tarkovsky wraps another of his epic musings on what it means to be human.’

Even in a career as distinguished as Tarkovsky’s Stalker still remains one of the highlights. Born in the Soviet Union to a noted poet father, Arseniy Tarkovsky, Andrei Tarkovsky studied music and Arabic before finding his true calling and enrolling in the Soviet film school V.G.I.K. He quickly distinguished himself as a rare and gifted director with his calling card film Ivan’s Childhood (1962), an audacious, poetic and visually stunning study of the mysteries of childhood. His trade mark slow, long takes (he famously described filmmaking as "sculpting in time") and the mysterious magic of imagery which is hard to match for sheer beauty and a stunning use of colour, are all correct and present in Stalker, his 5th feature film. It is a slow and meditative film, the audience is invited to contemplate more than to watch, to let go of an urge to figure out a concrete meaning, but to individually interpret. As Ingmar Bergman once famously said: “Tarkovsky is the greatest of them all. He moves with such naturalness in the room of dreams. He doesn’t explain. What should he explain anyhow?”

Stalker is a complex, oblique parable that draws unforgettable images and philosophical musings from its sci-fi/thriller setting. Sci-fi it may be but not as we are used to. Stalker has little use for the broader hallmarks of the genre: robots, spaceships, lavish totalitarian dystopias, and other stock scenarios imagined as empirical extrapolations of a given society. Here Tarkovsky forges a future vision all of his own, stuck in a hinterland of familiar yet unfamiliar landscapes which allows it to evoke the uncanny, the unknowable, and the fundamental mysteriousness of existence. Very loosely adapted from Arkady and Boris Strugatsky’s novella “Roadside Picnic,” “Stalker” is set in an unnamed country in a vague near-future, where there is an area called the Zone. It is apparently inhabited by aliens and contains the Room, where in it is believed wishes are granted. In the Zone, nothing is what it seems. Objects change places, the landscape shifts and rearranges itself. It seems as if an unknown intelligence is actively thwarting any attempt to penetrate its borders. The Stalker is the hired guide for the Professor and the Writer who wish to enter the Zone and ultimately the Room. But as with the rearranging landscape all is not what it seems with the three characters. Geoff Dyer states ‘one of the film’s most remarkable qualities is its resistance to interpretation. Archetypal characters reveal themselves as unique individuals; established facts waver and evaporate; desperately sought goals become objects of dread. Stalker, Zone, Room—none escapes ambiguity or interrogation. We may well leave the film knowing less than we did when we entered.’

'The plot is a coat hanger on which the director hangs oblique, open-ended philosophical, psychological, and existential ruminations about the nature of art and the essence of the human soul.’ ‘Nonetheless, it remains a dense, complex, often-contradictory, and endlessly pliable allegory about human consciousness, the necessity for faith in an increasingly secular, rational world, and the ugly, unpleasant dreams and desires that reside in the hearts of men.’  Patrick Nabarro - pnabarro wordpress In aggregate, however, what these various artifacts, objects, and narrative events do ultimately capture is something akin to the essence of what man is made of: a tangled knot of memories, fears, fantasies, nightmares, paradoxical impulses, and a yearning for something that’s simultaneously beyond our reach and yet intrinsic to every one of us. Is that thing hope? Faith? Or, as implied by the masterful climactic monologue from Stalker’s wife, is it simply devotion? Perhaps Tarkovsky summed it up best when he wrote about Stalker, “In the end, everything can be reduced to the one simple element which is all a person can count upon in his existence: the capacity to love."

So WFC invite you to journey with us through the Zone and ultimately to the Room guided by the Stalker. Please don’t miss this screening, it is really is Event Cinema and what a treat to be watching it at the lovely Connaught!

‘Stalker is a movie to be watched as many times as physically possible, to be picked apart, discussed, argued over, written about, to inspire music, books, poetry, other movies, teachers, philosophers, historians, governments, even the way an individual might chose to live their life. It really is that astounding.’


‘Whatever its ultimate meaning, this is a complex, challenging work of rare beauty and power whose elusiveness is part of its fascination.’ David Parkinson - Empire

‘The film has a hypnotic pull, drawing the viewer deeper and deeper into its enigmatic adventure by crafting a world all its own.’ Mark Olsen - Los Angeles Times

Posted by Worthing Film Club at 08:49