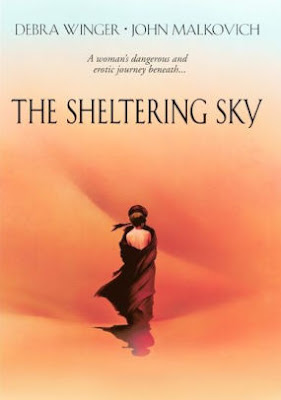 Back at St. Paul's on Monday 12th August

With the untimely death of the Italian film maestro Bernardo Bertolucci in 2018 WFC are proud to be screening The Sheltering Sky (1990) as a tribute to the great man. TimeOut said of the film  ‘As you would expect it’s a big, handsome film, rich and strange in psychological depths and eroticism.’

Starting out fittingly as a poet (his father was Attilio Bertolucci - a famous Italian poet) Bertolucci transformed his love of words into cinematic poetry to became one of the giants of Italian cinema, and indeed cinema itself. In a career that spanned over 50 years he directed luminescent and game changing gems such as The Conformist (1970), The Spider’s Stratagem (1970) and most (in)famously Last Tango in Paris (1972) and The Last Emperor (1987). All delivered labyrinthinely emotionally complex stories with audacious creativity, coupled with his trade mark vivid and sensual aesthetic style thus ensuring that his movies always had beauty, layers and uncommon depth. However some of his films were not without controversy, as Philip Concannon of the BFI stated ‘The legacy and reputation of Bernardo Bertolucci is brilliant and yet complex.’

Standing along side all of his other great works The Sheltering Sky ‘is about sliding over the edge into oblivion, but going in style.’ (Vincent Canby - The New York Times) Adapted  from the Paul Bowles’ (who also narrates and has a cameo in the film) novel of the same name, it tells the seemingly simple tale of a bored and disconnected American married couple Port (John Malkovich) and Kit (Debra winger) and their companion Tunner (Scott Campbell) who are ‘travellers but not tourists’ and their journey to North Africa in search of an emotional and intellectual reawakening, only for it to become a slow decent into hell. Working with his long term cinematographer Vittorio Storaro the film is ‘visually stunning to look at, but it is never simply picturesque. It mesmerizes, making the Sahara a metaphor for a universe that is overwhelming in its vastness but also as simple and finite as a grain of sand.’ (Vincent Canby - The New York Times) Bertolucci also does a fine job in opening up the interiorisation of the novel and bringing us into the isolations and motivations of the characters. He brings to life the the book’s metaphysical nightmare about two lost souls who fall into oblivion because, on some level, that’s what they’re seeking. It was about people collapsing into the abyss of their own minds. Add to this fine performances from the three leads and a classic is born.

Beautiful but dark and rich in its complexity it is a fine tribute to the late great Bertolucci and we at WFC really hope you will attend the screening. We can’t wait to share it with you.