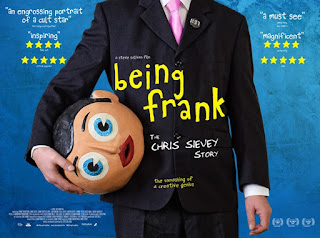 Connaught Cinema on Monday 6th May

WFC are very pleased to present Being Frank: The Chris Sievey Story, a lovingly created documentary about the man Chris Sievey and his big papier mâché headed creation Frank Sidebottom. As the director states ‘Being Frank tells a twisted tale of split personalities - a suburban creative superhero with a fanatical desire to preserve the myth he created, and eventually having to battle against being consumed by his alter ego.’

The ‘court jester of the of the Manchester music scene’ Frank Sidebottom occupies a pretty unique position in British culture. He was an artist, comedian, musician and prankster, that ironically achieved the fame that eluded his creator. As the title suggests this heartfelt film sets out to explore the distinction and duality of Chris Sievey and his all consuming creation Frank Sidebottom, and the complexity of the relationship between the two entities. ‘It is the story of two men: one real, one made-up; one frustrated by lack of artistic recognition, the other the strangest pop-cultural success story of the ’80s and ’90s. Inextricably bound (by being the same person), yet starkly distinct and, to some degree, mutually antagonistic.’ Don Jolin - Empire

Driven by a devoted and loyal fanbase, this tender and absorbing posthumous (Sievey died in 2010) documentary was funded by a grassroots KickStarter campaign and spearheaded by award winning film maker Steve Sullivan (Heap of Trouble 2001). 7 years in the making, the film was a labour of love for Sullivan. He was given unparalleled access to an archive of material found rotting in the late Sievey’s brother’s cellar, from which he has managed to fashion order from the the chaos of found VHS tapes, cardboard cutouts, notebooks, costumes, memorabilia and inspired zine artwork. Peppered with affectionate and penetrating interviews from friends and family, it provides a frank insight into the invisible creator and his larger than life highly visible creation. It dares to take a peek at the man behind the mask, albeit a papier mâché one, and attempts to pin down the allusive creator, his motivations and his creative process. But ultimately ‘it’s a celebration of a uniquely hilarious and brilliant person, an artist driven by creativity and playfulness’ (Dan Stubbs - NME) and even frustration, and his need for some sort of recognition and an audience, even if that fame belonged to his creation and was at the expense of the creators’s own and very different ambitions.

We at WFC headquarters can’t wait to screen this wonderful, thoughtful and thought provoking film.
Don’t miss it. Watch the trailer

‘Fans will delight in seeing sides of Chris and Frank they never have before. Those who’ve never even heard of Frank Sidebottom will find the inspiring, touching life story of a man touched with genius. As Frank himself might say, it’s fantastic… it really is. Dan Stubbs - NME

'This is a meticulously crafted tribute about a frustrated, frustrating man who made a huge mess of things – much of it intentionally. One of a kind, to say the least.' Alex Godfrey - Timeout

Posted by Worthing Film Club at 07:44 No comments: