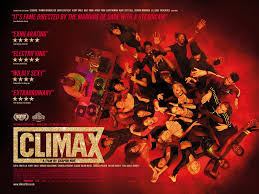 Film: 8pm
Tickets: free to members / £5 for everyone else.

Back at St. Paul's on Tuesday 12th February

Ever the provocateur, Gaspar Noé maker of 2002's visceral shocker ‘Irrevérsible’  returns with the exhilarating and hallucinatory Climax.

Amazingly shot in just 15 days it tells the story of a young French dance troupe, on the cusp of an American tour, partying after rehearsal only to discover the sangria is spiked with LSD. Ripping up the filmic rules books and playing by his own rules as ever Noé has produced a film that is 'visually extraordinary, structurally and formally audacious.' Peter Bradshaw

He cranks up the decibels of a pounding dance soundtrack, along with his trade mark nausea-inducing camera work, to produce a work of sensual overload that will have your head melting and your heart pounding. He takes us from the heaven of the initial breathtaking dance sequence into a not so slow descent into hell, albeit a  startlingly beautiful hell. Playing with the conventional narratives, he begins with the end credits and a seemingly sweet opening sequence of the dancers talking to camera about why they love to dance. But look closer and next to the tv in which the dancers are talking are a pile of videos, the titles of which signal the influences and forces that are about to be unleashed.

Noé's interest in the primal forces that "LSD or mainly alcohol can bring you back to a more reptilian way of thinking, you are not human anymore. It is all about survival, about reproducing species, about sex and domination. The moment we start losing control of the logical brain we go to a psychotic way of thinking." are laid bare in the most exhilarating and heart stopping fashion. Climax certainly is one of a kind.

Don't miss it! Watch the trailer

'Part musical, part political treatise, and with more than a wink to Dante’s ‘Divine Comedy’, Noé is at his most decadent and devilish.' Joseph Walsh Time Out

'Noé is giving us a cinema of sensual outrageousness and excess that makes other films look middleaged and tame.' Peter Bradshaw The Guardian

The film is free to Worthing Film Club members (£30 a year - email Caroline at worthingfilmclub@gmail.com to join) or £5 for a ticket, cash on the door.  For more details on membership, see here
Posted by Worthing Film Club at 05:47 No comments: