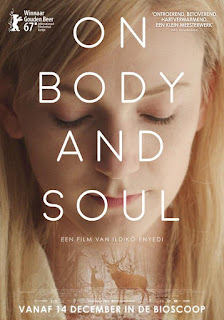 After an unforgettable night of revelry at the 2001 special event, our 10th birthday has been well and celebrated. Such fun was had by all, before and after the film, helped along with flamboyant costumerie, special guests and mountains of cake.  We are now dusting ourselves down and looking forward to our November offering:

The Berlin Golden Bear winning ON BODY AND SOUL on Monday the 6th of November at 8.15pm.

ON BODY AND SOUL was the winner of the Golden Bear and FIPRESCI Prize at this years Berlin International Film Festival. It tells the story of Endre (Géza Morcsányi), the shy manager of a Hungarian slaughterhouse, and Maria (Alexandra Borbély), the new quality control manager. They discover that they share the same dreams, where they are transformed into deer in a winter woodland. It is Director Ildikó Enyedi's eight feature film, and her first of the 21st century, so don't miss out on this unique and original piece of filmmaking.

Screening is at the Connaught at 8.15pm on Monday 6h of November.

The film is free to club members (£35 for 12 films + free use of our DVD library) or £7 to non-members.  For non members to book tickets in advance, click here

Posted by Worthing Film Club at 12:08 No comments:

To celebrate we've put together a season of lesser known films, called Hidden Gems! We'll be screening a film every Wednesday at Coast over the next few weeks. Tickets are on the door only, and are £4 or £2 for Worthing Film Club Members, doors @ 7.30pm, films @ 8pm.

Last of the season, but not least we have 'Bagdad Cafe' (1987), scheduled for Wednesday 11th October.


Based on Carson McCullers novella, this beautifully shot, bizarre and charming fable is the perfect dose of joyful filmmaking.