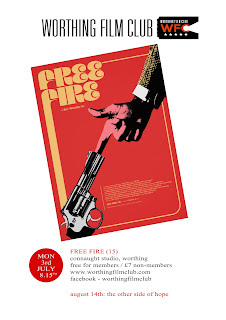 Set in Boston in 1978, this tightly-knit film tells the tale of a meeting organised in a deserted warehouse between two gangs which turns into a shootout and ultimately a game of survival.

Brilliantly-drawn gang leaders are played on the one side by Cillian Murphy (SNEAKY BLINERS, BATMAN BEGINS) and on the other, Sharlto Copley (DISTRICT 9, MALEFICENT) with a great supporting cast including Brie Larson and Arnie Hammer.

Filmed in a disused warehouse on the edgy streets of Hollingbury, this film packs a punch delivering hilarious one-liners in between some bloody battle scenes.

You can watch a trailer for it here. Don't miss it!

Screening is at the Connaught at 8.15pm on Monday 3rd July .The film is free to club members (£35 for12+films + free use of our DVD library) or £7 to non-members (who can buy tickets in advance here or on the night)