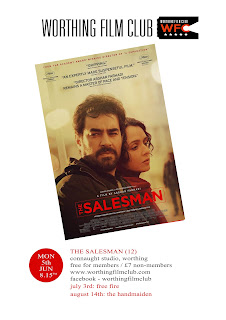 Worthing Film Club are proud to present the OSCAR award winning THE SALESMAN on Monday 5th June at 8.15pm.

Asghar Farhadi (A SEPARATION; THE PAST; ABOUT ELLY) returns with the story of a young couple who play the lead roles in their local theatres presentation of Arthur Miller’s 'Death of a Salesman'. Their relationship suffers after they move into an apartment that was previously occupied by a prostitute, as their life begins to mirror their art.

The film was thrust into the spotlight as the filmmakers would have been denied entry to the States for the Oscars, due to Donald Trumps attempted immigration ban. In London there was a free public screening held at Trafalgar Square on the night of the Oscars, in support of the film and in protest to the ban. The film went on to win the Best Foreign Film Oscar that evening, in what partly represented a protest vote against Trump by the Academy. The film itself premiered at Cannes 2016, where it picked up two awards, for best screenplay and best actor. THE SALESMAN has been described as another wrenching and nuanced study of empathy, intellectual filmmaking at it’s best, that sits well in the filmmakers already excellent canon of work.

Screening is at the Connaught at 8.15pm on Monday 5th June .The film is free to club members (£35 for12+films + free use of our DVD library) or £7 to non-members (who can buy tickets in advance here or on the night)