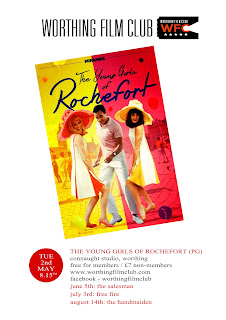 Screening is at the Connaught at 8.15pm on Tuesday 2nd May (Please note this is a Tuesday screening!).The film is free to club members (£35 for12+films + free use of our DVD library) or £7 to non-members (click here to buy non-member tickets) .
Details of how to join can be found here and don't forget to follow us on Facebook
Posted by Worthing Film Club at 15:57 No comments: