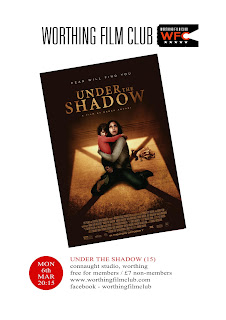 Screening is at the Connaught at 8.15pm on Monday 6th March.The film is free to club members (£35 for12+films + free use of our DVD library) or £7 to non-members. Details of how to join can be found here and don't forget to follow us on Facebook
Posted by Worthing Film Club at 00:12 1 comment: 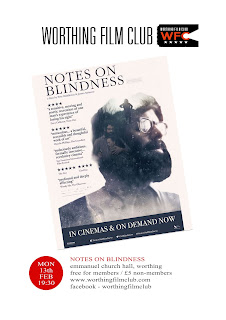 ** Please note venue change for this screening, which will take place at Emmanuels Church Hall, NOT at the Connaught Cinema **

NOTES ON BLINDNESS is an extraordinary visualisation of theology professor John Hull’s audiotape records of his descent into blindness. Utilising the mimed “verbatim theatre” technique, where the actors lip-sync to the original recording, NOTES ON BLINDNESS blurs the boundaries of what makes a drama and a documentary.

This deeply affecting sensory experience was expanded upon its release, to maximise it’s accessibility. The film was release as we will see it, but also with audio-description, and as an enhanced soundtrack version, with the latter turning the film into a singular aural experience. Alongside this, the co-directors James Spinney and Peter Middleton created 'Notes On Blindness: Into Darkness', an immersive virtual reality experience.

Nominated for three Baftas (British Film, Best Documentary, Outstanding Debut) we're backing thiswonderful film to be the worthy winner of an award or two. The Baftas take place the night before our screening, so keep your eyes peeled!

***** “Miraculous… a beautiful, accessible and thoughtful work of art” - The Guardian
**** “A sensitive, moving and poetic recreation of one man’s experience of losing his sight” - Time Out


Doors will be open at 7pm, with the screening at 7.30pm on Monday 13th of February at Emmanuel Church Hall, St Michael's Rd (entrance on Heene Road, opposite and down from Heene Community centre). Please note that we will be putting on a bar too, so do come early for a pre film drink.
Posted by Worthing Film Club at 16:34 17 comments: