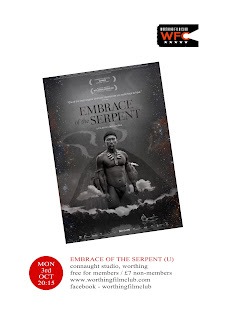 Directed by Ciro Guerra, based on the diaries of Thoedor Koch-Grunberg and Richard Evan Scultes, This exquisite Columbian film carves out deep truths about humanity when ancient and modern worlds meet. It tells two stories about the same man, 40 years apart, Karamakate, a shamanic lone tribesman who is sought out by European explorers, who both travel through the Amazon in search of a sacred plant that can heal them.

Mark Kermode in the Guardian was 'utterly mesmerised, captivated and transported.'

Screening is at 8.15pm on Monday 3rd October at the Connaught Studios, Worthing.

Posted by Worthing Film Club at 14:40