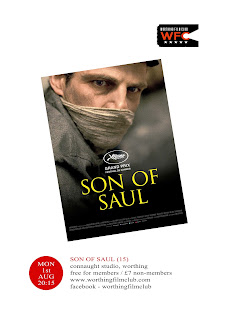 The next film to be shown by Worthing Film Club at The Connaught is the Oscar-winning Hungarian film 'SON OF SAUL' on Monday 1st August at 8.15pm, at the Studio, Connaught Cinema, Worthing.

The debut film of László Nemes, it tells of a prisoner forced to work in the gas chambers in Auschwitz, and also won the Grand Prix prize at Cannes.

Posted by Worthing Film Club at 16:30 No comments: