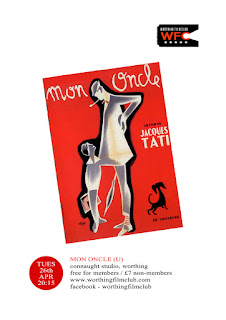 Beautifully shot, it captures the spirit of Chaplin & Keaton whilst at the same time giving a fresh cinematic feel that captures 1950's increasing obsession with and obsession with modernity - a bridge between the old silent cinema era and the stylishness of modern art cinema, that has influenced the likes of Jean-Pierre Jeunet, Wes Anderson, David Lynch

The film is free to film club members (£35 year for 12+ films, plus free use of our DVD library), or £7 to non-members. Details of how to join can be found here and don't forget to follow us on Facebook

Screening 8.15pm at The Connaught Studio on Tuesday 26th April. *

* Please note that unlike our usual screenings, this film is being shown on a Tuesday.
Posted by Worthing Film Club at 16:15 No comments: